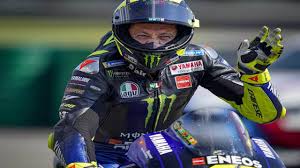 Yamaha MotoGP rider Valentino Rossi says his miraculous near-miss with the crashing bikes of Franco Morbidelli and Johann Zarco in the Austrian Grand Prix left him “feeling bad” and “very much scared”.

Rossi was chasing after works team-mate Maverick Vinales for fifth when Zarco and Morbidelli collided behind him on approach to the Turn 3 right-hander. As the corner is at such a sharp angle but comes after a long straight, the two crashed bikes went flying across the racing line after the collision at high speed. 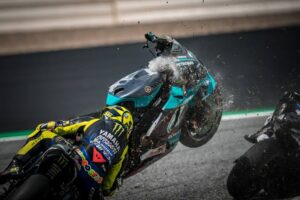 Zarco’s Avintia Ducati slammed into the inside airfence, was launched over the inside kerb and cartwheeled over Vinales, while Morbidelli’s Petronas SRT Yamaha remained at ground level and threaded the needle between Vinales and Rossi as the two turned in, before bouncing through the gravel and finally coming to a rest. Fellow riders acknowledged the factory Yamaha men came close to a horrific impact, with Aprilia rider Aleix Espargaro saying that the championship had dodged “one of the worst days of MotoGP history” and Tech3 KTM’s Miguel Oliveira agreeing Rossi and Vinales escaped “a very, very, very big tragedy” and “can light up a candle for the angels”.

Rossi was captured by cameras re-watching the incident once he’d arrived to his garage under the red flag, and was visibly shaken by what he’d seen. And the seven-time MotoGP champion confirmed that was the case when talking to the media after the race, describing the accident as “so scary” and “terrifying”.

“We have to pray to somebody. Everybody has to pray to who they decide to,” he quipped when told of Oliveira’s comment. “But, fuck, I’m very very… I feel bad, I’m scared, very much. Because yes, today was very dangerous.” Rossi took the restart and completed the 20-lap ‘second race’ in fifth place, finishing three tenths behind the KTM of Brad Binder.

“It was a very difficult moment, really – to restart for the second race and try to retake the concentration. 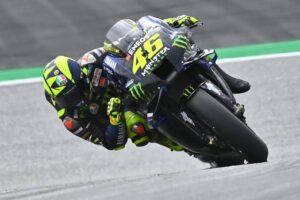