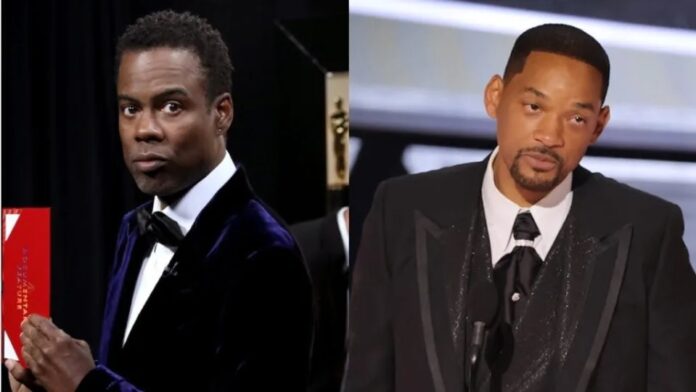 On their U.K. tour, Chris Rock and Dave Chappelle laid into Will Smith, with Chappelle quipping that the formerly family-friendly “Fresh Prince of Bel-Air” star had “ripped his mask off” when he infamously slapped Rock at the Oscars in March.

“Will did the impression of a perfect person for 30 years, and he ripped his mask off and showed us he was as ugly as the rest of us,” Chappelle said at the Liverpool’s M&S Arena on on Thursday.

Chappelle observed that Smith’s Oscar-night act of violence actually made him more relatable. “Whatever the consequences are… I hope he doesn’t put his mask back on again, and lets his real face breathe. I see myself in both men,’” he said of both the “perfect” star of “Men in Black” and the angry actor who slapped him.

Chappelle kicked things off by asking Rock, “Did that s— hurt?’”

“Goddamn right… the motherf—er hit me over a bulls— joke, the nicest joke I ever told,” Rock responded. The joke, if you need reminding was a dig at Smith’s wife, Jada Pinkett Smith’s baldness, comparing her to Demi Moore in “G.I. Jane.”

Rock claimed later that he didn’t know about Jada’s struggles with alopecia.

Smith has since apologized to Rock in an emotional video, but Rock has yet to accept the apology. For his action, Smith has been banned from Academy events for the next 10 years and voluntarily resigned his membership. However, he did not have to hand back his Best Actor Oscar for “King Richard.”

During his set, Rock also took aim at Meghan Markle, who recently launched her new podcast, Archetypes, accusing her of using her complaints about the British royal family to become famous.

Celebrating the Stellar Career of Serena

TENNIS Jessica Gome - September 4, 2022 0
Serena Williams G.O.A.T status is undeniable. As much as we are happy she’s moving on to other things, it’s sad that we may not...

Dave Chappelle, Chris Rock Clap Back at Will Smith Over Oscars Slap

CELEBRITY Susan Johnson - September 3, 2022 0
On their U.K. tour, Chris Rock and Dave Chappelle laid into Will Smith, with Chappelle quipping that the formerly family-friendly “Fresh Prince of Bel-Air”...