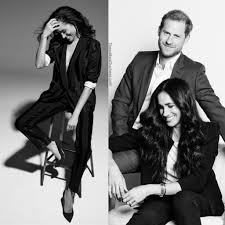 According to biographer Tom Bower, who wrote the book “Revenge: Meghan, Harry and the War Between the Windsors” told PageSix that the portraits released by Nigerian photographer Misan Harriman are meant to humiliate the Royal Family.
The pictures were taken during Harry and Meghan’s visit to the United Kingdom to take part of Queen Elizabeth II’s vigil and funeral, previous to the couple opening the @OneYoungWorld event.

This picture was taken ahead of the reception that the Palace offered to the heads of state and officials that visited for the Queen’s funeral and it’s meant to symbolize the continuation of the monarchy.

Harry and Meghan’s pictures were posted just two days after the Palace released a portrait of the Royal Family featuring King Charles III and Queen Consort Camilla Parker Bowles, alongside the Prince of Wales William, heir to the throne, and his wife Kate Middleton.

Now a portrait of the couple during their visit to London for Queen Elizabeth II’s funeral is under the spotlight, as an expert claims that it’s meant to be a “f*ck you” to the Royal Family.